In the beginning there was a name 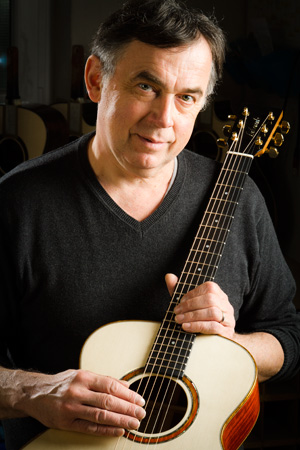 In the beginning there was a name...'Lakewood'.
Had I known how often I would be asked about its meaning, would I have chosen another name? No, even after all these years and so many questions, I remain happy with the name Lakewood which has now become entrenched in the awareness of guitar history.

The Lakewood adventure began in the spring of 1986. I had some years previously completed my training under master luthier, Manfred Pletz, and was endeavouring to find my niche as an independent luthier. Due to musical preferences I graduated from nylon string classical to steel string guitar.
Germany in the mid-eighties was a country of classical guitars. Steel string models naturally originated in the USA or perhaps as facsimiles from Japan. So I was very motivated to do something about this and put Germany on the acoustic guitar world map.

But I have omitted to introduce myself: my name is Martin Seeliger and with me everything must start somewhere. I was 28 years old and very curious. This is still the case today, to the inspiration and sometimes the frustration of those working with me. Way back then when I was searching for a name for my steel string guitars, my finger stopped on a map at a small town ‘Lakewood’ on Lake Erie in the USA. The name just suited guitars so I decided there and then and have never regretted it. Lakewood became a German steel string guitar brand.

We have been building Lakewood guitars in Giessen, near Frankfurt/Main since 1986. Much expertise has been accumulated by us in the professional, artistic creation of fine guitars. Traditions mean a lot to us if they manifest in everyday working reality. New technology offers incentives and challenges for the creation of something as complex as an acoustic guitar which demands the highest levels of precision. We are driven to build instruments whose tone, aesthetics and finish meet highest standards. To achieve this, we delve into the absolute finest detail and are proud to be writing part of German musical instrument history.

Since those early years much has been achieved. Over 20 000 guitars have been created which could tell many a story and which have become part of many diverse lives. This history represents an obligation for all of us at Lakewood. A Lakewood represents a piece of luck.

On behalf of all Lakewood colleagues.

Inside Lakewood - A film about Lakewood Guitars